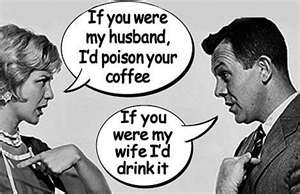 Last Sunday we began a new small group study from the book of Job.  I am sure most of you are familiar with the tests, trials, and temptations Job faced.  As you read in the first chapter you see the dialogue between God and Satan that initiates his afflictions.

“And the LORD said unto Satan, Hast thou considered my servant Job, that there is none like him in the earth, a perfect and an upright man, one that feareth God, and escheweth evil?” Job 1:8.

Satan accuses God of creating a hedge of protection around Job.  In response, God allows Satan to take all he has (except Job’s life, Job 2:6).  Satan takes the lives of his 10 sons and daughters, takes all of his wealth, and eventually his health.  Job is left with nothing but accusatory friends and his wife.

I have always found it interesting that Satan did not take the life of Job’s wife.  It would seem to me that would be the quickest way to destroy a man.  But as the story unfolds we see one potential reason for leaving her behind. In the midst of affliction, the advice Job’s wife gives her husband is rather dreadful.  “Then said his wife unto him, Dost thou still retain thine integrity? curse God, and die, But he said unto her, Thou speakest as one of the foolish women speaketh. What? shall we receive good at the hand of God, and shall we not receive evil? In all this did not Job sin with his lips,” Job 2:9-10.

However, before we are too hard on Job’s wife, we should remember that these troubles came to her as well.  Imagine losing all your children, in addition to your wealth and security.  Job’s tragedy was her tragedy.  So I do not want to be too judgmental.  But what I do want to look at is how she was used as an instrument of Satan.  Satan’s intent was to destroy Job, his life, and his faith.  In his attempt, he took all Job had.  Satan had the authority to take the life of Job’s wife, yet he left her behind.  Could it be that Satan knew she would be more of a hindrance to him alive than dead?

The influence of a wife is great.  A wife can make a good man greater or bring a good man down. The Bible explains it this way. “Every wise woman buildeth her house: but the foolish plucketh it down with her hands,” Proverbs 14:1.  One of the easiest ways to destroy your husband, your marriage, or your home is with your words.  Proverbs 18:21 says that, “death and life are in the power of the tongue.”  What power the words of Job’s wife must have held.  There is much we can learn from the example of Job’s wife.  I must ask myself, if Satan were to set out to destroy my husband, am I the kind of wife that could be used in his devilish plot? In the midst of tests, trials, and temptations am I a wife that is a help or a hindrance to my husband.  Am I building him up or tearing him down?

Job was under spiritual attack, just as all Christian men are under attack.  As spiritual leaders, Satan wishes to destroy their life, testimony, and family.  It is during these spiritual attacks in a man’s life that he needs the loving support from his wife the most.  Often times, Satan will use the troubles of this world to divide husband and wife.  Our eyes become fixed on our problems; words get spoken in haste and fighting begins.  Sometimes it may even seem that our husband is the enemy.  But it is important to remember that believers do not fight against flesh and blood but against “principalities, against powers, against the rulers of the darkness of this world, against spiritual wickedness in high places,” Ephesians 6:12.  Recognizing this, when we face those hard times husbands and wives need to come together in unity and not fight each other but together fight the Evil One.

So, just what kind of wife am I?  Well, you would probably have to ask my husband to get the truest answer.  But I can tell you what kind of wife I desire to be.  My greatest desire is to be a true help meet (Genesis 2:18) that is as a fruitful vine by the sides of his house (Psalms 128:3) and a virtuous woman (Proverbs 31:10) that is a crown to her husband (Proverbs 12:4) whose words are edifying and only minister grace (Ephesians 4:29).