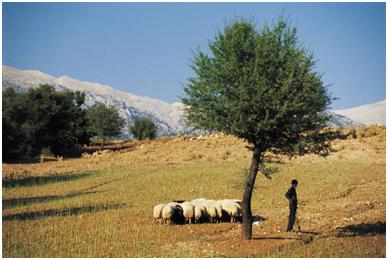 And the shepherds returned, glorifying and praising God for all the things that they had heard and seen, as it was told unto them.  (Luke 2:20)

Can you imagine what it must have been like to witness this event?  Here we find lowly shepherds, men of humble degree, thought poorly of by most men.  And yet, God chooses to announce through them the birth of His Son  –  Jesus  – born in a manger.  God’s gift to mankind was first given to the shepherds in the field.   I’m amazed and very thankful that God chooses to work with the small, unimportant things here on earth. Otherwise, where would I be?

When I think about what my Creator has done for me I’m overwhelmed with humility yet at the same time I’m filled with pride.  Author, C.S. Lewis penned this thought well when he wrote, “You come of the Lord Adam and the Lady Eve,  And that is both honour enough to erect the head of the poorest beggar, and shame enough to bow the shoulders of the greatest emperor on earth.” (Prince Caspian)

I am so thankful that I serve a God that I can come humbly before as well as boldly to the throne.  Had it not been for the babe in the manger who became the perfect Lamb of God, died on a cross and then defeated death and rose again all hope would be lost.

As we celebrate this Christmas season and dwell upon what God did for us may we all be as humble as the shepherds.  But let’s not forget what happened to them after their encounter with the Savior of the world.  And when they had seen it, they made known abroad the saying which was told them concerning this child. (Luke 2:17)  I have to ask myself, Who have I shared the good news with this season?  It’s easy to buy a present and give it away but what about giving the gift that all these presents are suppose to represent?  We celebrate Christmas to remind us of Christ birth and we give gifts to remind us of God’s great gift.  My prayer is that I will be like the shepherds and return glorifying and praising God.  And my prayer is that I will make the good news known abroad and tell others  –  for this is the greatest gift we can give to a lost and dying world.