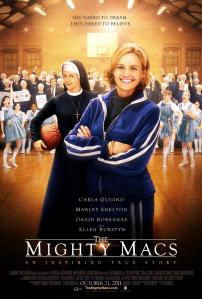 If you live within driving distance of Springfield, MO I have an opportunity for you! Next Thursday, August 11th, there will be a pre-screening of the upcoming movie, The Mighty Macs and I am giving away tickets to five of my local readers to this exclusive screening. The screening will be held at Wehrenberg Campbell 16 Cinema at 7 p.m.

The Mighty Macs Movie is coming to theaters October 21st. It is the true story of women’s basketball coach Cathy Rush. Coach Rush led her team, the Mighty Macs on an incredible journey in 1971. If you are looking for a great family movie night, this is the film for you! You can watch the trailer at www.themightymacs.com.

To win simply be one of the first five people to leave a comment and I will have an e-vite sent to you!

Movie synopsis: She Dared to Dream. They Dared to Believe. It’s 1971. Cathy Rush is a woman ahead of her time … and she’s about to embark on an adventure for the ages. A new era is dawning in the country and in collegiate athletics, where a national champion will be crowned for the first time in women’s basketball. In the lead up to this historical season, major universities are preparing their game plans to win that first title. Meanwhile a tiny all-women’s Catholic college in Philadelphia has a more modest goal: find a coach before the season begins. Providentially, Cathy Rush is about to find Immaculata College.

Recently married, Cathy is dealing with the aftermath of a truncated playing career. While cultural norms would have her staying at home, she’s willing to do the hard work necessary to help her new team reach their goals—or perhaps she’s just trying to achieve her unfulfilled dreams through them. From the beginning, her challenges are as imposing as the big-school teams Immaculata will face on the court. Cathy learns there is no gymnasium on campus, she receives little support from the school’s Mother Superior, and the school is in dire financial straits. To top it off, she may not even have enough players to field a team! While it appears the Macs don’t have a prayer, all hope is not lost. With the help of Sister Sunday—a spunky assistant coach—and the support of a booster club of elderly nuns, Coach Rush creates a new game plan that just might bring the team—and the school—together.

Will this pioneer buck cultural norms and spur her rag-tag team to unexpected heights? Or will her hard-driving ways create a wedge between the coach and everyone around her? One thing’s for certain: there’s never been anyone like Cathy Rush at Immaculata!

THE MIGHTY MACS is based on the incredible true story of the 1971-72 Immaculata College team that started in obscurity but became the original Cinderella story in women’s basketball. This team of pioneers went from barely making that inaugural tournament to the first dynasty in their game. And Cathy Rush, the woman that was ahead of her time, became immortalized when she was inducted into the Naismith Memorial Basketball Hall of Fame.

THE MIGHTY MACS stars Carla Gugino as Cathy Rush; David Boreanaz as her husband, NBA referee Ed Rush; Marley Shelton as Sister Sunday; and Academy Award and Tony Award winner Ellen Burstyn as Mother St. John. The film was written, directed, and produced by Tim Chambers. The film’s executive producers are Pat Croce, the former president of the NBA’s Philadelphia 76ers, and Vince Curran, a successful businessman and former basketball star at Penn. Curran and Chambers are founders and partners of Quaker Media. Get ready to cheer on a true Cinderella team when THE