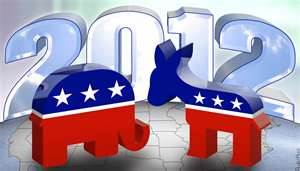 My last post talked about consequences and I am afraid that this next election will hold grave consequences.  So what should a Christian’s response be to the upcoming election?   It appears that our options for voting are between current President Obama and Mitt Romney.  I’m not even going to address the President’s policies these last 3 ½ years.  Let his actions speak for himself.  I’m also not going to address that fact that Mitt Romney is not a career politician (which I believe is a great asset) or his apparent values.  Laying all political, financial, and moral views aside, I want to address something different.  Should a Christian vote for a candidate who is not a Christian?

Regardless of how the media likes to spin the issue, the truth from God’s Word is that, “by their fruits ye shall know them” (Matthew 7:20).  Evaluate for yourself the “fruits” produced by our current President who strongly supports the murder of innocent babies and homosexual marriage.

So I ask the next question.  Is Mitt Romney, a faithful member of The Church of Jesus Christ of Latter-day Saints, a Christian?  While I cannot know his heart, I can look at the Mormon religion as a whole.

The Institute for Religious Research has a page on the Mormon religion (http://mit.irr.org/mormonism-christian-2) that explains the basic beliefs of Mormons.  Below are a few, but not all, of Mormon beliefs.

The Mormonism Research Ministry has compiled this list. (http://www.mrm.org/god-of-mormonism)

In his famous “King Follett Discourse” Joseph Smith (prophet, teacher, and leader of the saints) taught,

“God himself was once as we are now, and is an exalted man, and sits enthroned in yonder heavens. That is the great secret… [Y]ou have got to learn how to be Gods yourselves, and to be kings and priests to God, the same as all Gods have done before you…”

According to www.mormon.org in addition to the Bible, Latter-day Saints accept the following books as scripture:

This information does not even touch on all the false beliefs of the Mormons.  Check it out for yourself.

So, it is clear that the god the Mormons worship is not the True God of the Bible.  It is also clear that they do not worship the true Christ who says, “I am the way, the truth, and the life: no man cometh unto the Father, but by me” (John 14:6). Nor do they uphold the true Word of God.

So here is the dilemma.  If we have two unbelievers running for president what do we do?  How do we vote?  Let me answer that question with this one.   Are there only two choices?  As a Christian I believe that I should not only vote in each election, but that I should pray and seek out God’s will.  So, would God give His children the choice between two unbelievers?  Would God want us voting for an unbeliever?  Would God not give His children a way to make the right decision?  We might be tempted to cast a vote for an unbeliever because it is the “lesser of two evils.”  We might be tempted to lay aside the candidates faith or our faith and focus on the politics. But as a Christian I cannot separate my faith from my vote.  My faith is not what I do; it is who I am.  My conscience tells me that I would be wrong to vote for an unbeliever, regardless of the circumstances.  You see, God always gives His children the ability to do what is right.  “There hath no temptation taken you but such as is common to man: but God is faithful, who will not suffer you to be tempted above that ye are able; but will with the temptation also make a way to escape, that ye may be able to bear it.” (1Co 10:13)

It was John Quincy Adams that said, “Always vote for principle, though you may vote alone, you may cherish the sweetest reflection that your vote is never lost.”  So it looks like that over the next few months I am going to be doing some research on other 3rd party candidates, trusting that the God of the Bible is sovereign and knowing my conscience is clear.

4 thoughts on “A Christian’s Response to the Upcoming Election”