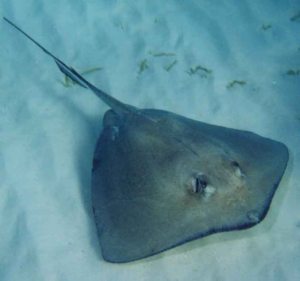 Last month, while vacationing in Orange Beach, I saw more stingrays than I’ve ever seen. One evening, just before dark, my son had one swim right beside him. Aaron didn’t like being that close to one so he got out. The next evening when we went back to the beach, he had no desire to get back in the water.

“Come on Aaron, the chances of seeing another stingray is slim,” I told him as I waded out into the water.

It wasn’t five minutes later when another one came along and swam between us. This time I got out of the water before he could. I know for the most part that stingrays are not that dangerous, but I did not want to take a chance of accidently stepping on one half-buried in the sand. Many people have been hurt by doing just that. (And in some rare incidences, stingrays can cause an even worse fate such as in the case of Steve Irwin.)

There were not a lot of people out, but there was one little boy playing in the water next to us. His parents were on the beach watching him. I decided to tell them about the stingray so they could decide if they wanted him to stay in the water. It turned out that they didn’t.  That evening before going in, we counted nearly a dozen stingrays.

So what does that have to do with evangelism?  Glad you asked! Let me explain.

I knew there was a potential danger in the water. So, not only did my family get out, but when I looked around and saw another person around I gave a warning. It was just a few stingrays and not that big of a deal, but I still took the time to warn them. Of course, the parents could have chosen to ignore my warning, but they didn’t.  My warning was just a polite and caring thing to do. Wouldn’t you do the same?

A few days after we get home from our vacation I’m reading in 2 Corinthians about Paul’s explanation of why he labors for the Lord.

“Wherefore we labour, that, whether present or absent, we may be accepted of him.

For we must all appear before the judgment seat of Christ; that every one may receive the things done in his body, according to that he hath done, whether it be good or bad.

Knowing therefore the terror of the Lord, we persuade men,” 2 Corinthians 5:9-11a.

Did you catch the reasons that Paul shares the gospel? There were three of them.

Let’s talk about the last one. “Knowing therefore the terror of the Lord, we persuade men.” I found it very easy to warn a family about a potential danger in the gulf shore waters. I didn’t hesitate. I didn’t worry that they might be offended. And I probably wouldn’t have taken it personal if they had ignored me. I simply warned them. And it only involved a few swimming creatures. But even the thought of potential harm coming to someone was enough to motivate me.

Why then do I find it so hard to warn people about the coming judgment of the Lord? Why does fear threaten me every time I want to share the gospel? We are not talking about potential harm coming to someone, but eternal death.

“It is appointed unto men once to die, but after this the judgment,” Hebrews 9:27.

Every man, woman, and child will face death one day. All will stand before God. If they die in their sins, they will go to hell, a very real place. In fact, Jesus talked about hell more than He talked about heaven. And while most people live for the moment, the truth is that our lives are just a vapor.

The other day Ray Comfort, from the Way of the Master, posted on his Facebook page a sobering and truthful statement.

“I am both a coward and a hypocrite if I believe that the world is going to Hell, but fail to verbally warn them.”

“Knowing therefore the terror of the Lord, we persuade men.”

If I knew a young boy was playing in dangerous waters, would I warn him?

If I knew a blind man was about to walk off a steep cliff, would I warn him?

If I knew someone was about to drink mislabeled poison, would I warn him?

If I knew a child was playing on a busy highway, would I warm him?

Lord, my prayer is that I will always love others enough to warn them. Let me be one who cares enough about people to persuade them to come to You. Let me be moved with compassion toward lost souls enough to share the gospel. Help me to remember that love is not passive, nor is it in word alone, but in deed and in truth! For Your glory!